Just back from a holiday to the islands of Malta and Gozo where we saw an abundance of delicious Mediterranean foods growing.

The islands have no rivers or lakes and little rainfall beyond the winter rainy season. The soil looked dry and baked, with crops irrigated from underground reserves, while hardier plants like wild fennel and cacti lined the roadsides.

Of the two islands, Gozo is host to the most agricultural activity – though there’s plenty on Malta too despite the seeming desire to build-build-build on all available land.

We saw no animals (apart from a few chickens in a pen) but heard that Gozo is independent in terms of its meat and cheese production – so presumably they’re largely kept indoors. Animals can’t graze there – there’s not much to graze on – so a huge amount of the agricultural land is given over to growing hay for animal feed.

Everywhere we went we saw larger fields either awaiting harvest or hosting freshly baled hay, while smaller plots were given over to growing fruits (largely grapes for wine) and vegetables.

This looked wasteful to my vegetarian eyes given how many other foods could be grown in that climate – though I did partake of a fair amount of locally-produced cheese, if not the meat, during our stay.

What was growing in June?

We were there just before the various fruits reached maturity – we saw young grapes, figs, apples, apricots, peaches, watermelon, oranges and lemons growing. And even a few banana trees dotted round, though no evidence of fruit. 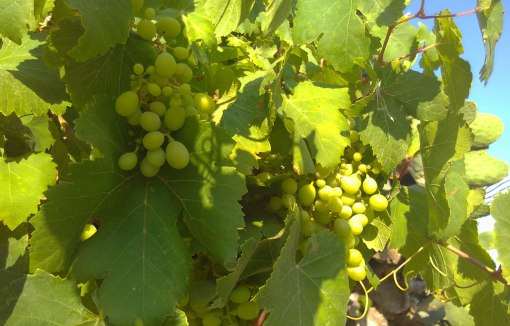 apples and grapes grow in the shade of cacti

In the fields, corn was the tallest crop to be seen, while tomatoes, pumpkin, marrow and courgette were ubiquitous.

And everywhere fennel growing tall and wild, with its tiny yellow flowers.

Within a few short days I was fantasizing about having my own kitchen garden under that hot sun with its more exotic fare and longer growing season. Maybe some day…

I returned to this growth spurt after a week of sunshine and showers in Dublin. A million miles from the parched Gozo landscape.