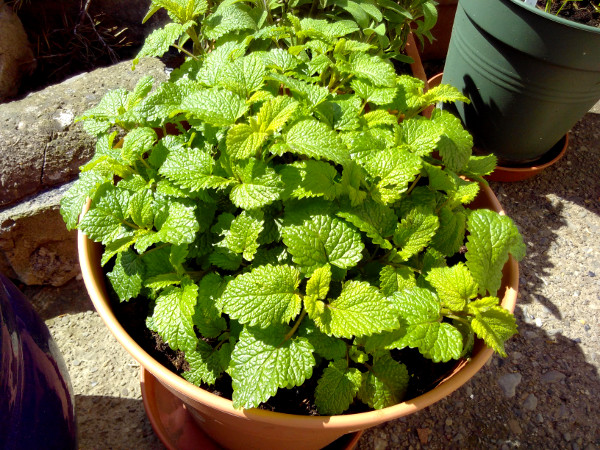 A former colleague gave me an unsolicited cutting of this plant last year. And I wasn’t entirely sure what to do with it (except to put it in a pot and watch it struggle into life last year – and thankfully flourish this year).

It smelled familiar from cosmetics/oils but I knew nothing about the plant, other than the fact that it’s from the mint family and is named for its lemony scent.

Its oil and extract is used to flavour foods and drinks, and in skin products.

It is also used to treat digestive problems, pain (such as menstrual cramps, headache, toothache), coldsores, colic in babies and some mental disorders (stress, anxiety, insomnia).

And interestingly it seems it is also being used to treat effects of Alzheimer’s disease, ADHD, high blood pressure and more.

Having not used it to treat any of the above, the only property that I can attest to is its calming effect. I’ve had a small amount of fresh leaves in tea on a few of occasions and noticed a very mild sedative effect.

I have no issue sleeping (luckily I can do it any time and almost anywhere), so I have largely avoided using it again because of the potential soporific effects. Then the other day I decided to try some dried leaves, and the effect was much more noticeable.

I tried it early evening to avoid potential drowsiness, and for an hour or more I was feeling – how shall I say – rather at peace with the world…

I decided I better do some ‘research’ on it (i.e. Google), to make sure there were no potential side effects (so I could enjoy it again without any nagging worries).

There don’t appear to have been any reliable clinical studies on effects of long-term use, but no major red flags were raised about ingesting ‘food amounts’ or ‘medicinal amounts’ every now and then.

The only issue I came across was in relation to thyroid problems, where it is advised to avoid lemon balm if being treated for related conditions, and also not to use it in conjunction with other medications with a sedative property.

Any tips on other uses (other than getting mildly stoned) and dosage, please get in touch!