What a year 2018 was. We had such weather extremes – multiple violent storms, the heavy snow in March, the rainless, intensely hot summer, the grey dampness of November and December, and now the unseasonable mildness that precedes a promised cold snap (or as it is better known, winter).

Climate change is here. For the last few years it was happening ‘over there’. And it wouldn’t be with us for years and years. But this year she flashed her ankles in earnest and put us in Western Europe in a bit of a daze. God knows how we’ll cope when her knees come out.

But rather than slip into helpless, horrified anxiety about the imminent end of civilisation as we know it… I’m going to distract myself with some of last year’s growing and gardening highlights.

These were months of heavy lifting as my beloved and I tried to transform our messy little corner of the urban hinterland into something more habitable. We shifted tonnes of earth around the garden into new raised beds and a rockery (dumping the rest around the sides and back of the freshly painted shed), and we lay paving stones where before a tangle of earth and weeds had been. And when that was all done I got sowing – garlic and shallots went into the ground, seed trays were filled, and potato chitting commenced.

March opened very dramatically with many inches of snow falling in this part of the world. Everything ground to a halt (including bread deliveries, which sent the country into a frenzy of baked-goods hoarding). When I wasn’t sitting in our front window judging the people outside needlessly battling the drifts (they were out of bread presumably), I was at the back window fretting about my garlic and shallots, trapped under the icy snow. They survived, though the earth around them was heavily sodden for weeks after.

Spring sprang back later in March, and I was all about planting potatoes. It was my first time to grow them. And I found it very, very exciting.

Our garden improvements continued apace, and in April and May we put up bamboo fencing to improve the look of the place, and assembled a lean-to glasshouse against the only available bit of actual wall in the garden, which thankfully also happens to be the sunniest spot. With our raised beds and our glasshouse, we were taking this home-growing business to a new level!

And all the while, I was diligently keeping my spud leaves insect free by hand, and earthing them up, and possibly singing to them.

May was also the month I discovered the mild narcotic effects of lemon balm. Good times.

And then it was time to start eating! June yielded strawberries, shallots, beetroot, lettuces, kale… And our first potatoes! 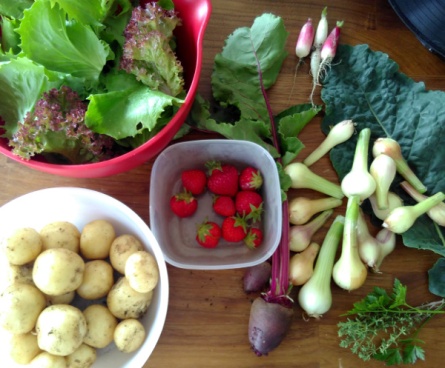 Shallots drying on an elevated rack made of chicken wire. Unfortunately the weather hasn’t been good enough over the last week to leave them drying outside

Storm Hector in June knocked the shit out of the bigger plants, including my beloved potatoes, but they all lived to see another day.

The beans, peas, courgettes and tomatoes started to take off.

In July, the long heat wave began, and I watered as carefully and conservatively as I could. And thankfully the plants thrived throughout (well apart from some carrots and parsnips in too dry soil, and some potatoes scabbed through dehydration).

Plants that thrived to the point of becoming sinister were the hoikkaido squashes, whose ever-searching tendrils took over a substantial portion of the garden. Bean and pea pods swelled, little courgettes appeared, all my tomato plants started fruiting…

I planted four hokkaido squash plants (probably should have just planted one) – they’ve taken over the bed and are spreading their tendrils around the garden. I’m not sure where this is going to lead. Hopefully to a bumper harvest of squash!

Two of our three courgettes

The ‘progress’ pea pods are coming along nicely.

We’ve six thriving tomato plants (five in the glasshouse, one outside – a mixture of Douglas F1s and ‘Gardeners Delight’), all starting to show fruit.

The dry weather (and dried-out soil) stunted the growth of my first crop of carrots. The ones on the left are from a pot, the ones on the right for a too stoney bed, hence the forking. 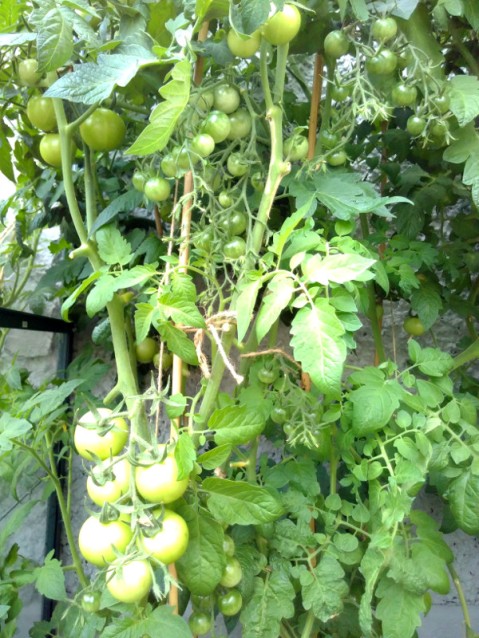 The growth of the tomato fruit has slowed down (though there’s already lots of it across our six plants, and lots more flowers yet). We pruned them a couple of weeks ago, and there’s been lots of foliage regrowth but the fruit seems static. I’ll give them extra feed and water and see if the situation changes. 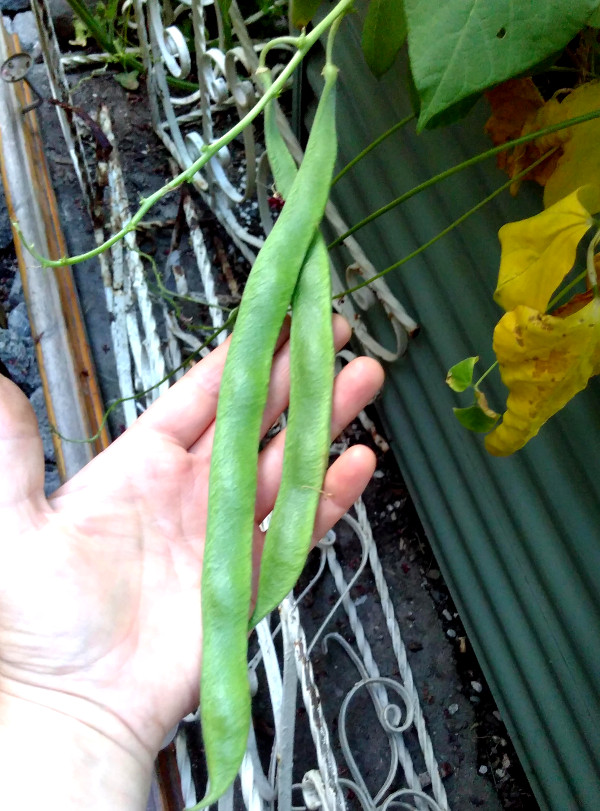 The runner bean glut is upon us. Going to leave maybe half on the plants to grow full beans for drying, and eat the rest in pods over the coming weeks.

August was all about colour. Our wildflowers came up in abundance, helping us do our bit for the bees. The tomatoes started to ripen from shades of orange into deep, delicious reds. And the courgette glut commenced.

One of our many bee visitors investigating the oregano flowers.

Our little wildflower wilderness is doing well, and the borage in particular is very popular with the bees. 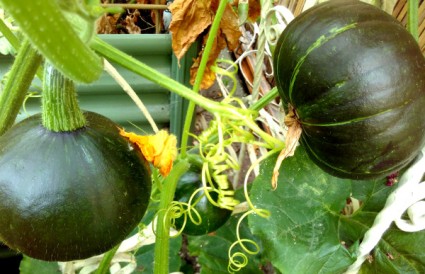 I’ve counted nine squashes growing, and many more little fruits showing on our ever extending plants. We harvested one last week, but far too early. It was not a pleasant eating experience!

The courgette glut continues apace. We’ve had massive fruits from our two main plants, and looks like plenty more to come. Still working on perfecting the courgette fritter (with mint, feta, garlic, egg and flour).

The crystal cucumbers were also ready to eat. Sadly, I was their only fan.

September ticked along nicely giving us a plentiful supply of tomatoes, courgettes, and loads of spring onions.

When the excitement of the glut died down, so did my gardening and blogging enthusiasm.

I didn’t have much in the ground for winter – my pot-based carrots weren’t doing well into October, November. Ditto the bed-based beetroots. The sprouts, thankfully, had made it through storms and rain to Christmas time, providing the traditional excessive festive flatulence. And my kale plants, of course, are looking fresher and lovelier by the day. And are, as usual, going largely uneaten (I just can’t warm to the stuff).

There are still plenty of little sproutlets to be harvested, the last tomatoes are changing colour in a ‘sunny’ spot on the kitchen counter, and my flat leaf parsley seems to just love the current grey and largely damp weather conditions.

One of the main learnings from the year that was is that squash takes over the garden, and I’m not all that keen on eating it. So that’s off the list. Another is that runner beans need to be eaten whole when they’re young and tender – and there’s only so many you can eat so don’t bother growing so many. So they’re probably off the list too.

My peas didn’t do well this year, and I think I heard that this was a common issue among growers in 2018, so I’ll try again next year and just up the number planted.

For a second year my shallots didn’t keep past a few weeks, so I think I’ll admit defeat on that front and pour my onion energy into leeks, spring onions and chives instead. I’m still working through the summer’s garlic haul so they’re a keeper.

Also, in a small garden and given how long they take to grow and the amount of water input required I’m not going to bother with broccoli in 2019 either.

New on the menu will be aubergines in the glasshouse (and tomatoes and chillies if there’s room), the aforementioned leeks, french beans and maybe mange tout. Plus all the usual suspects, including excessive amounts of potatoes. Roosters this time I think.

In the meantime there is much work to be done on the garden. The bamboo fencing got blown to bits in the various storms, our brick shed is a damp and dingy place that needs to be demolished, and everything generally looks like crap.