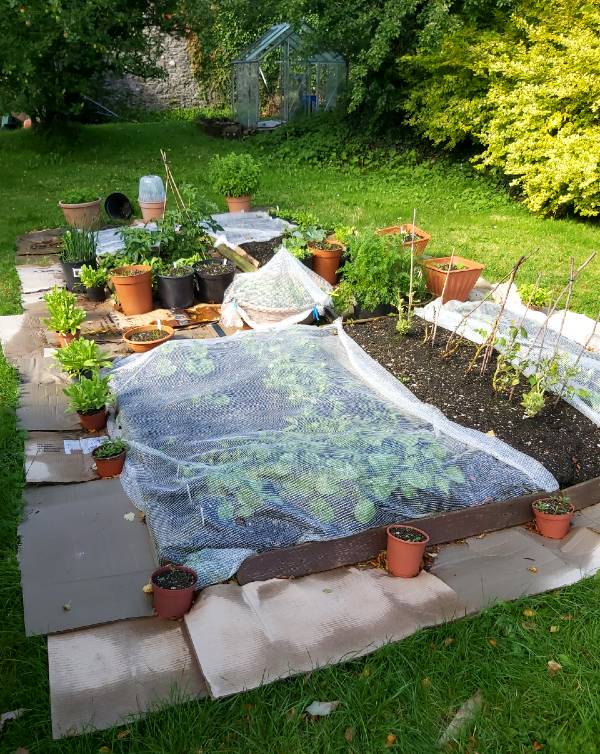 We set up three no-dig raised beds shortly after arriving at our new home in Roscommon in mid-June to transplant young plants kept too long in small pots in Dublin, and to get some new seeds started ASAP.

There has been near-constant rain since then and slow growing for the transplanted veg, but the new seedlings are thriving. We’re using netting to cover the seedlings as birds (we’re presuming sparrows) made short work of our transported beetroot plants, and appear to have stripped three of our five remaining broad bean plants. The broad beans have not taken kindly to their various replantings and have barely grown. Ditto the green beans, though they have developed a small amount of fruit. To compensate we planted c. 20 mange tout so hopefully will be inundated in a few weeks.

In the beds we’ve also planted an abundance of parsley and coriander, spring onions, pak choi, turnips, spinach, beetroot, a late lettuce (Brighton) and a ‘Winter Greens’ mix. In pots carrots, parsnip and more beetroot look to be doing well so far, along with leeks, chives and lots of marigolds to distract pests. 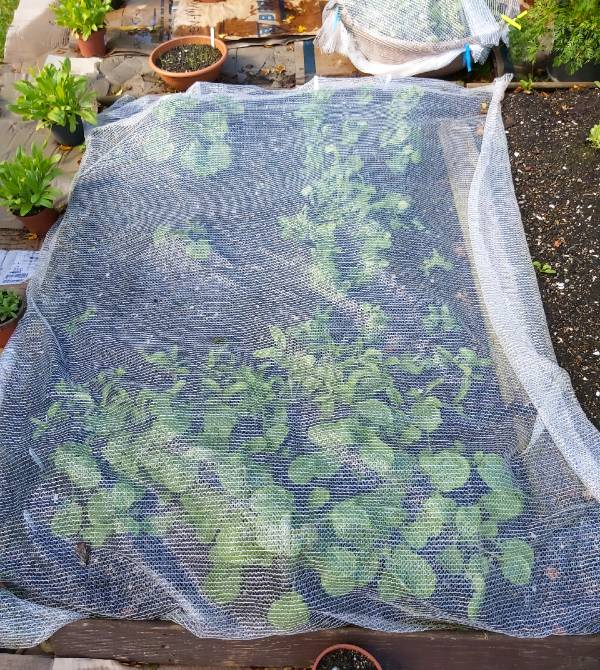 The tomato plants (Arctic Circle), which had languished in Dublin waiting for their growing space are starting to flower. They are way behind in their growing season but we may get some fruit yet.

And one of our two transported courgette (Black Beauty) is showing first late fruits. It’s also showing mildew spots from over-saturation with rain. We germinated a couple of back up courgette seeds just to be on the safe side and one of them looks to be doing well in a different bed.

We’ve got them all. The grass is home to couch grass, creeping buttercup, hogweed and dandelion etc. alongside clover and selfheal.

Bindweed has cropped up throughout the hedges and interwoven with the ubiquitous ivy and Virginia creeper on walls and around trees.

And then there’s the brambles, dense thickets of them. We’ve tackles some of the most accessible clusters, digging out the roots as best we can. But there’s a lot more where they come from.

A hedge overtaken by brambles, with a dose of bindweed. 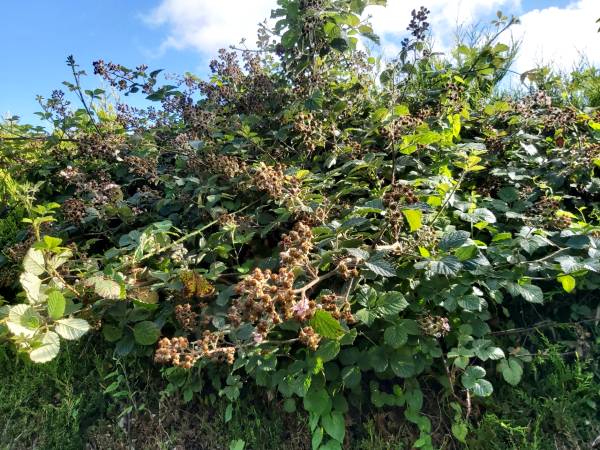 We’re letting these ones grow for the fruit. 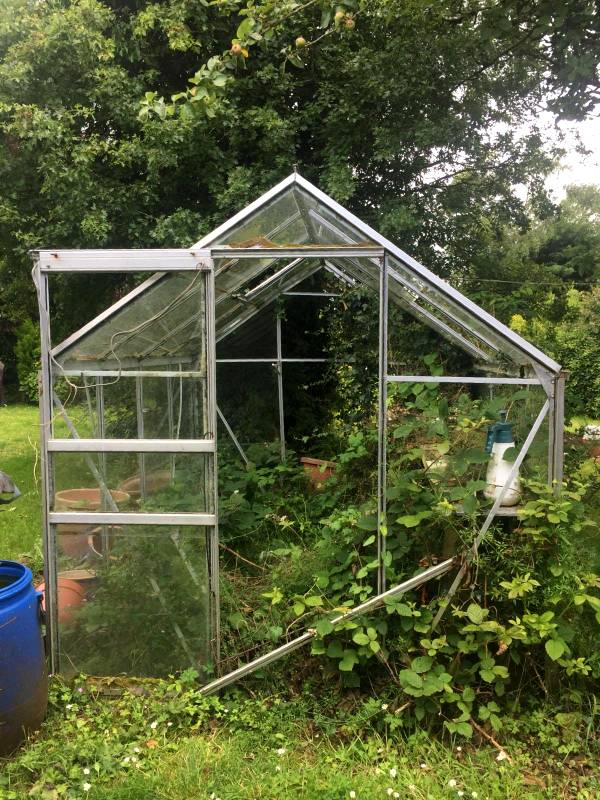 We cleared out the brambles and various other growth from the glasshouse and have laid some cardboard to suppress weeds. The next phased is salvage all the unbroken glass, clean it and the frame, and reinsert the glass all around the sides. We’re going to replace the roof glass with perspex.

We uncovered some delicate strawberry plants in an overgrown bed next to the glasshouse. 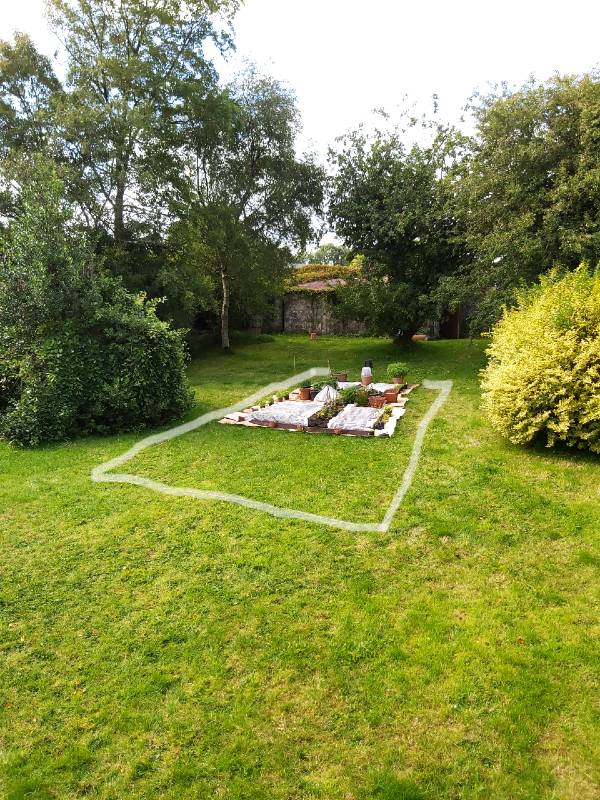 After witnessing the rain over the last few weeks, and the activities of various ‘pests’ and weeds, we’ve decided to get a generous-sized polytunnel (14ft by 30ft) and conduct most of our growing undercover, using the glasshouse as a seedling factory. The above illustrates the size, but not necessarily the placement (we may place it a little further forward and over into the space no woccupied by the holly trees-slash pussy willow hodgepodge which we’ve decided to remove). 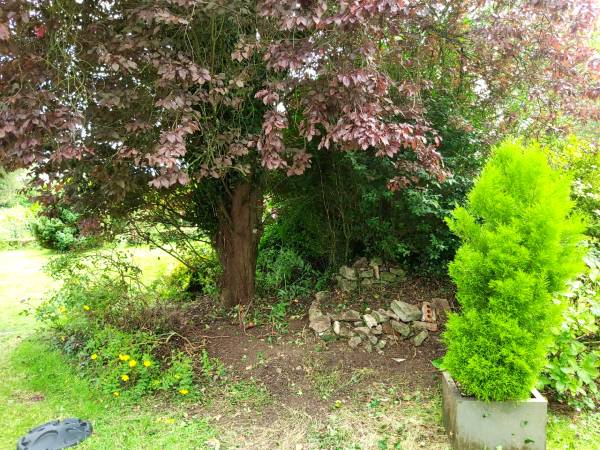 We’ve done some cutting back of brambles and a little trimming of one of the larger conifers to open up the space some more. There are lots of trees and bushes to cut back and raise the crowns of once the nesting season is over at the end of the month.

In the meantime we’ve had a couple of tree surgeons come to price pruning our non-fruiting prunus cerasifera above, the unwieldy hawthorn next to the glasshouse and the apple tree.

We know nothing about apple trees, but it appears that our (cooking) apple tree has had dessert apple cuttings grafted into it.

The apple tree is very popular with crows who have pecked out/off dozens and dozens of fruits so far, the remnants of which are filling out the compost heap.